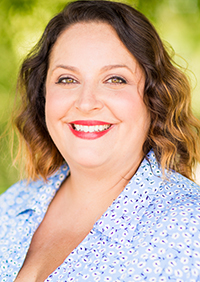 Rylee (she/her/hers) is Charleston Stage's Director of Education and Engagement. Rylee is originally from Pennsylvania but arrived in Charleston through New Jersey. Rylee has a Bachelor's in Vocal Performance from Ramapo College of NJ and a Master's in Integrated Arts and Education from the University of Montana, and over 15 years of experience teaching voice, music, theatre, and dance.

Most recently, Rylee was the co-founder and Artistic Director of Dance.Laugh.Learn. A music program for kids and the music teacher at Murray LaSaine Montessori School. Rylee is a certified K-12 music teacher, certified in kids yoga, and trauma-informed. Rylee lives in West Ashley with her husband Ben and five-year-old daughter Vivian. 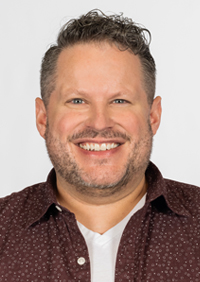 Sam (he/him/his) is Charleston Stage’s Resident Music Director and Director of Music Education. He holds a Bachelor of Music Education Degree in Instrumental Music/Trumpet Performance from Baylor University in Waco, TX, as well as a Masters Degree in Musical Theatre/Opera Music Direction from Arizona State University. Sam has over 20 years experience teaching music professionally, and has been working as a theatre music director and conductor since 2005. Professionally, Sam has worked for The Phoenix Theatre Company, Childsplay, The Broadway Palm West Dinner Theatre, Arizona Broadway Theatre, Lyric Opera Theatre and Copperstar Repertory Company prior to coming to Charleston Stage.

Colin (he/him/his) is Charleston Stage's Education Program Manager. He grew up in Florence, KY (right outside of Cincinnati, OH). Colin received a Bachelor of Fine Arts in Acting and a double-minor in Musical Theatre and Performing Arts Administration from Western Kentucky University. After graduating, Colin moved to Charleston to work as a Resident Actor for Charleston Stage. During his time, he continued his passion for performing and directing, while also discovering a love for theatre education. Colin has taught with Charleston Stage TheatreSchool classes and Troupe classes, Engaging Creative Minds, and Charleston County School of the Arts Theatre Faculty.

Classes are taught by Charleston Stage's Professsional Resident Acting Company. These young theatre professionals move to Charleston for 10 months after completing college theatre programs all over the country. In addition to teaching, they can be seen on stage throughout the season.